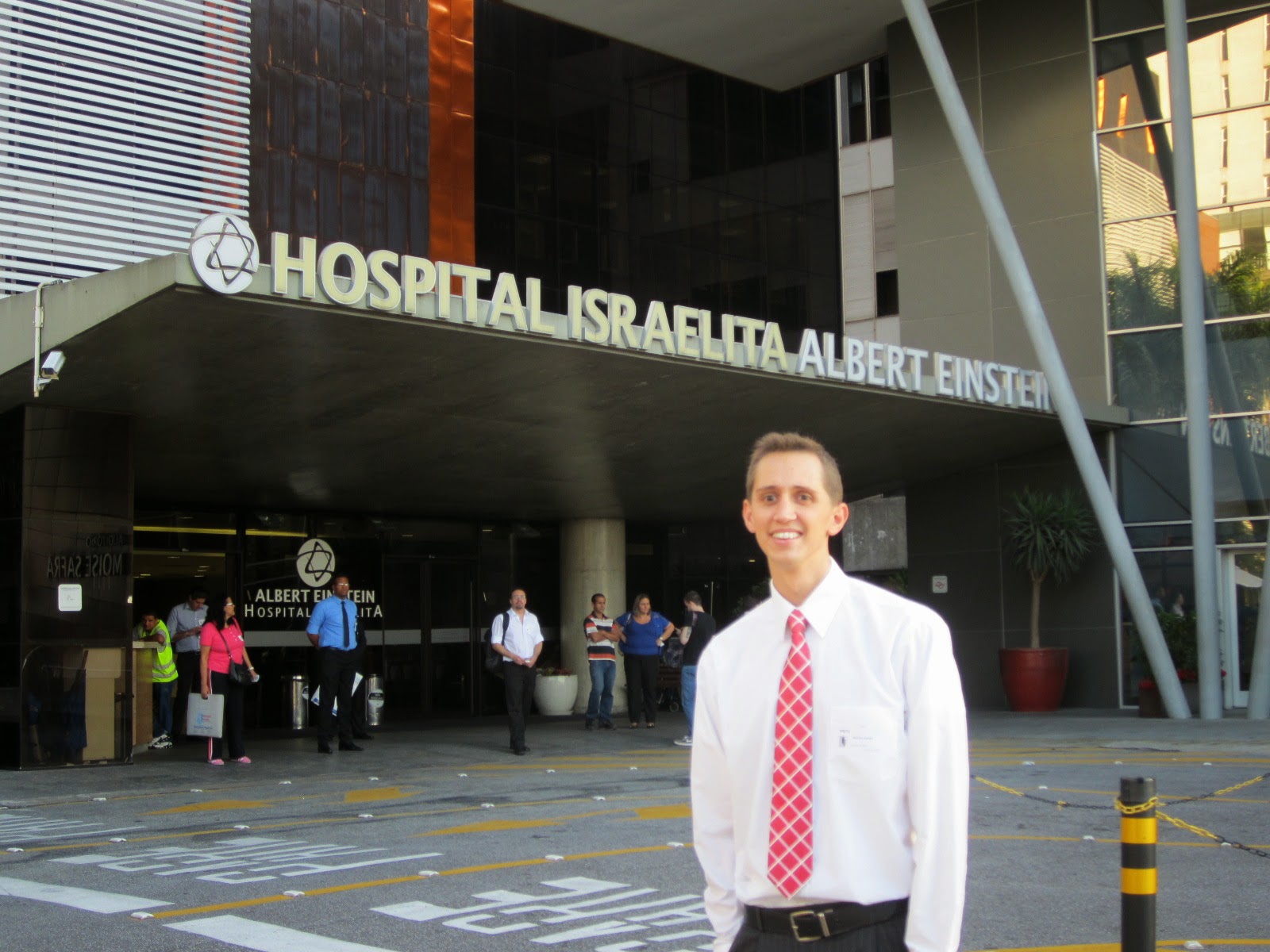 After meeting with Elder Costa, we had an appointment to see Dr. Ribus at the Albert Einstein Hospital.  Driving to the hospital brought back so many memories, as we traveled the same streets as before.   As you rounded a corner and followed the street up on a hill, was a beautiful state of the art building.   It was just like yesterday that we were there.  But this time, under very happy circumstances. I was so excited for Dr. Ribus to see Britten and how well he was doing. 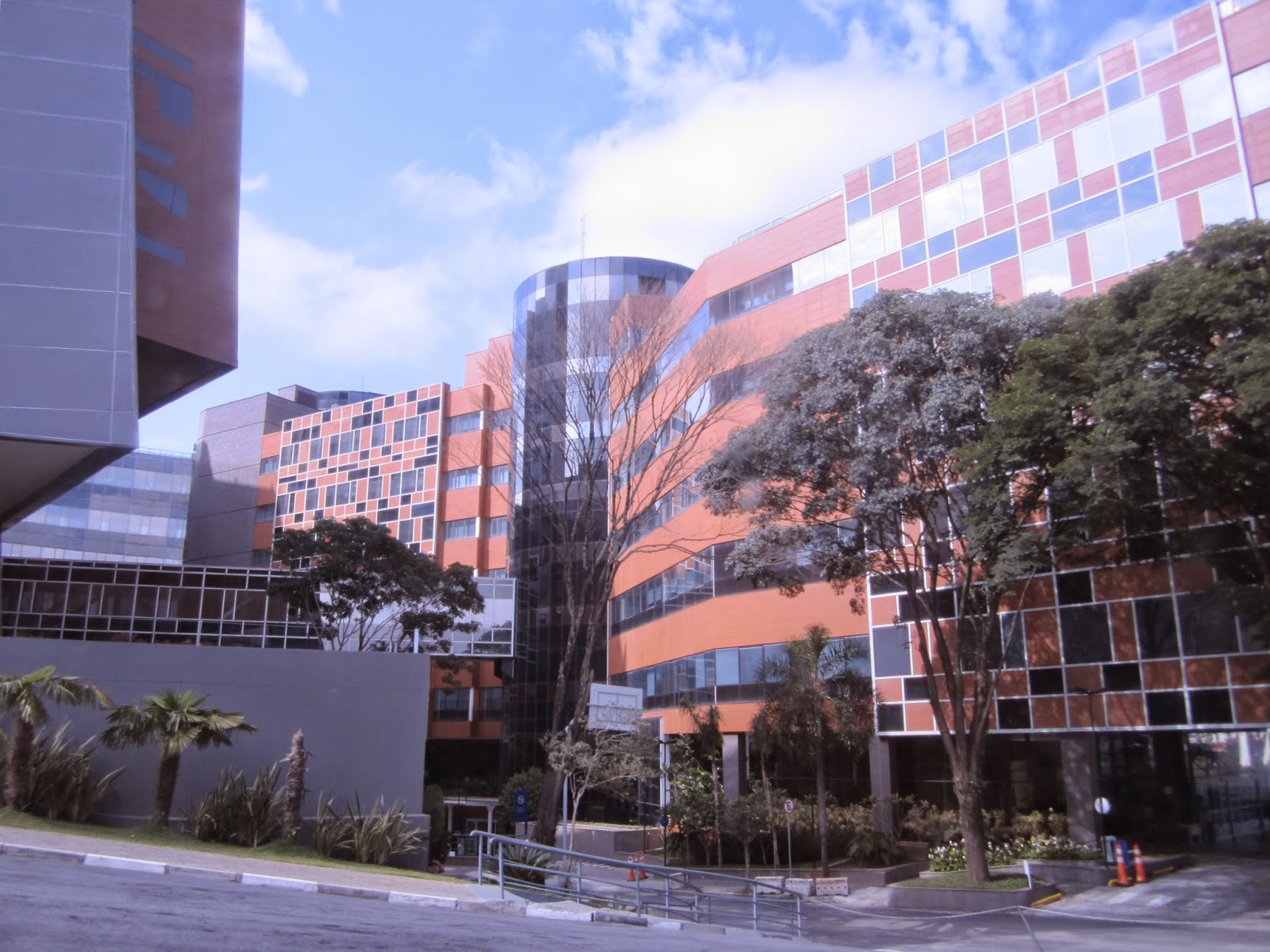 While we walked down several familiar halls to get to Dr. Ribus's office, I admired all the architectural
structures as I had noticed them before.  The hospital was such an incredible, beautiful building. 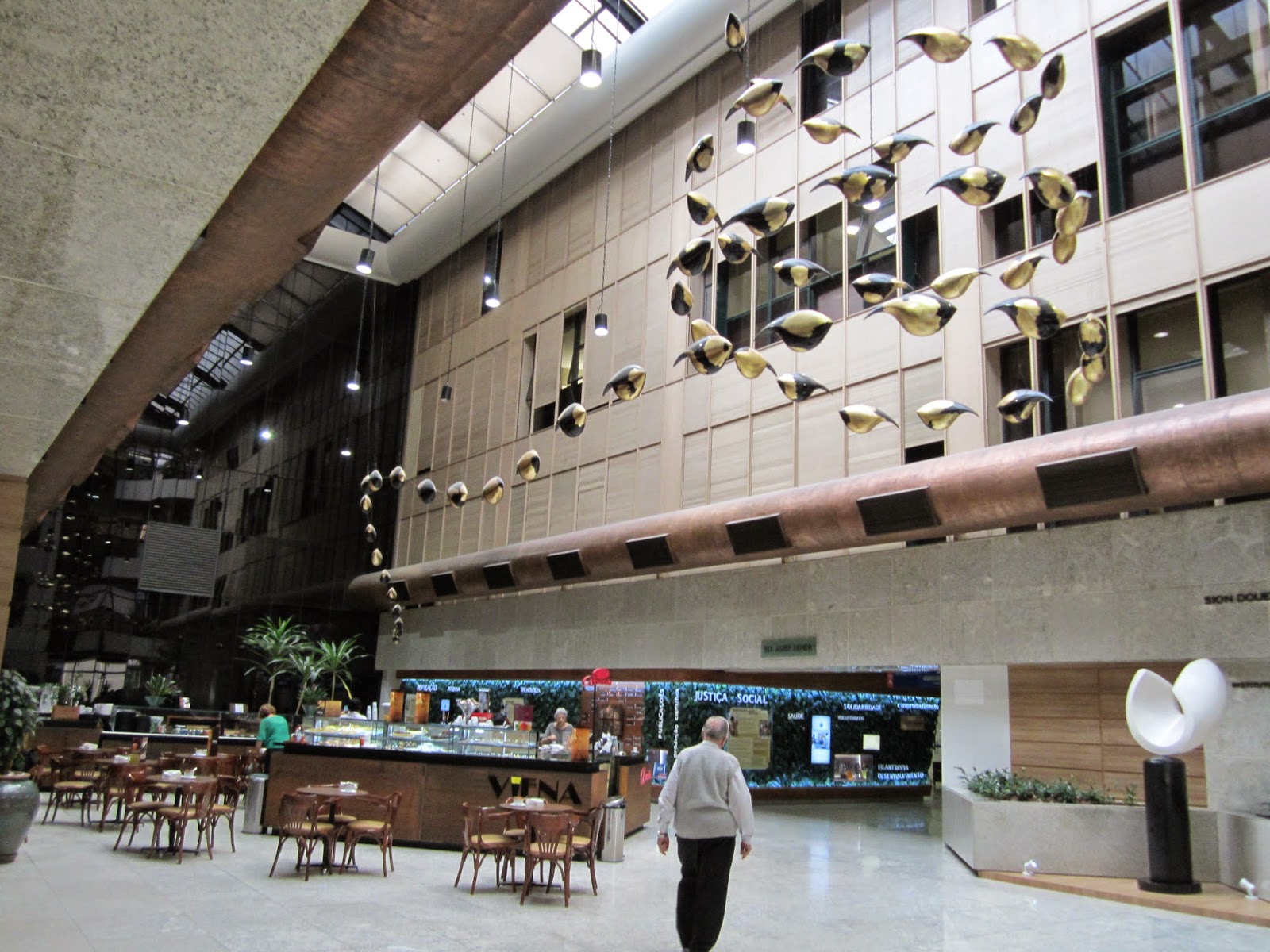 We waited with anticipation to see Dr. Ribus.   When the Secretary called us back to his office, Dr. Ribus took Britten's hand and said, "Wow!  Look at you!"  He then shook our hands as he welcomed us to sit down in his office.  He just kept looking at Britten in awe.  After a few minutes he said, "I would never have imagined this possible!" "I am so happy for you." 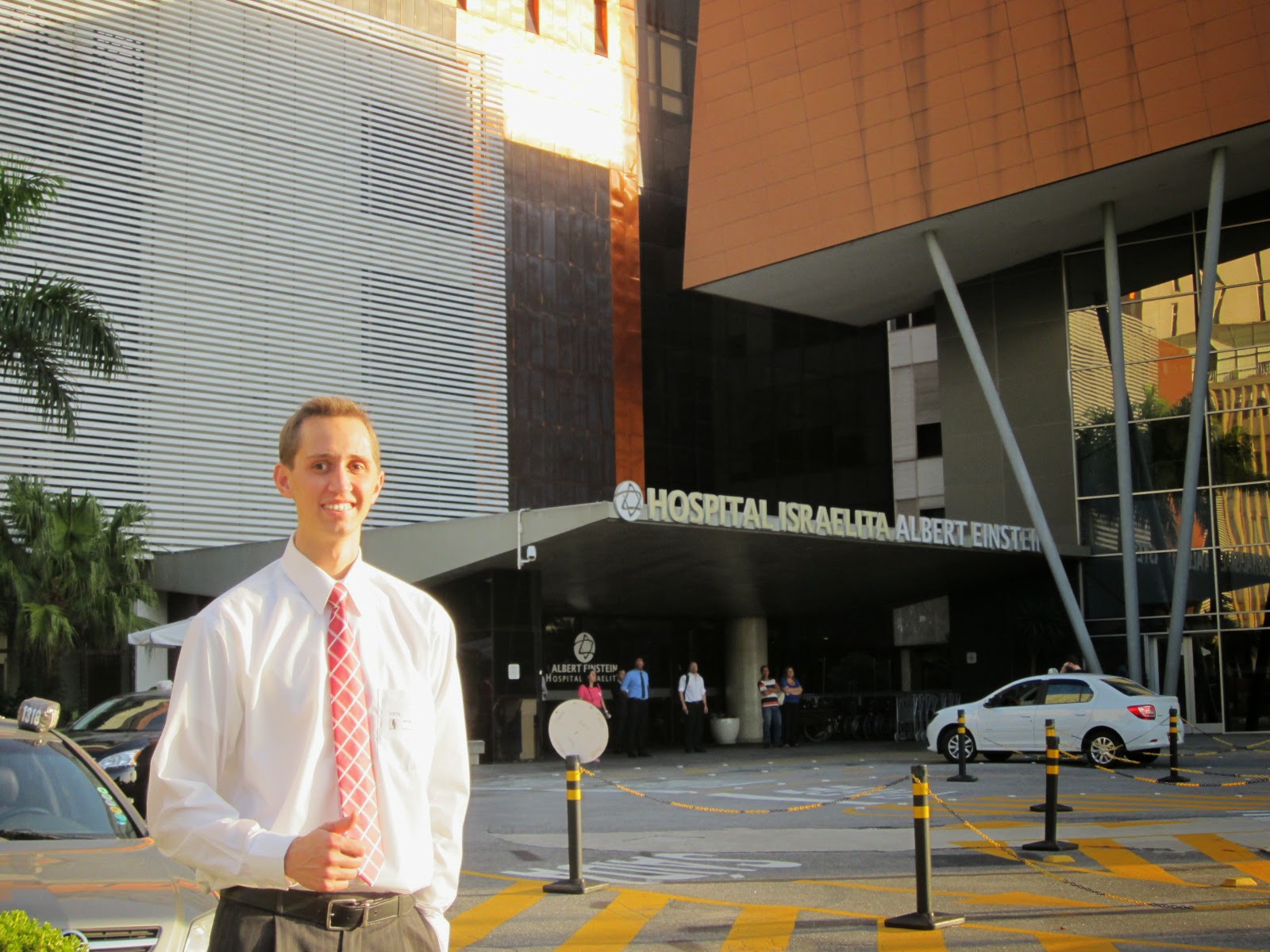 The secretary had told us Dr. Ribus had a very busy afternoon with 2 surgeries and a young boy he needed to go attend to, so we didn't expect much time with him.  Steven and I were so impressed though as Dr. Ribus was very patient and wanted to visit with us.  He had so many questions he wanted to ask Britten about his recovery.  As they were visiting, Dr. Ribus said again, " I am just so impressed with you.  Your recovery is just very impressive."  He was very impressed that Britten was back in College.  We told him that school is very difficult for Britt, but he is doing it with an amazing attitude.  He asked Britten what he thought he wanted to go into?  Britten said that it has been very difficult deciding what to do.  Before his mission, he wanted to be a Dentist.  But now with his limited eye sight, and the difficulty of school...It makes it very challenging.  Britten told Dr. Ribus that he thinks he is going into Physical Therapy.  Britten said, "I want to help people, and my PT's helped me so much, learning how to walk and get around.  I think that is something I want to do."
Dr. Ribus commemted, "well, you will certainly be able to help people and understand what they are going through...I think that is a marvelous decision for you."
He then asked Britten why we came back to Brazil?  Britten said with a smile on his face, "To see you!"  Dr. Ribus just looked at him, not knowing what to say.  Then Britt said, "I never got to tell anyone goodbye, so I'm just coming back to see all my friends, Elder Costa, You, the nurses and to speak at a fireside."  Britten told him, "I've been able to speak at a lot of public functions and for church fireside, and I love doing that."  "I feel like I am able to help people."  Dr. Ribus said, "I'm sure you are!"  "That is good...that is good." 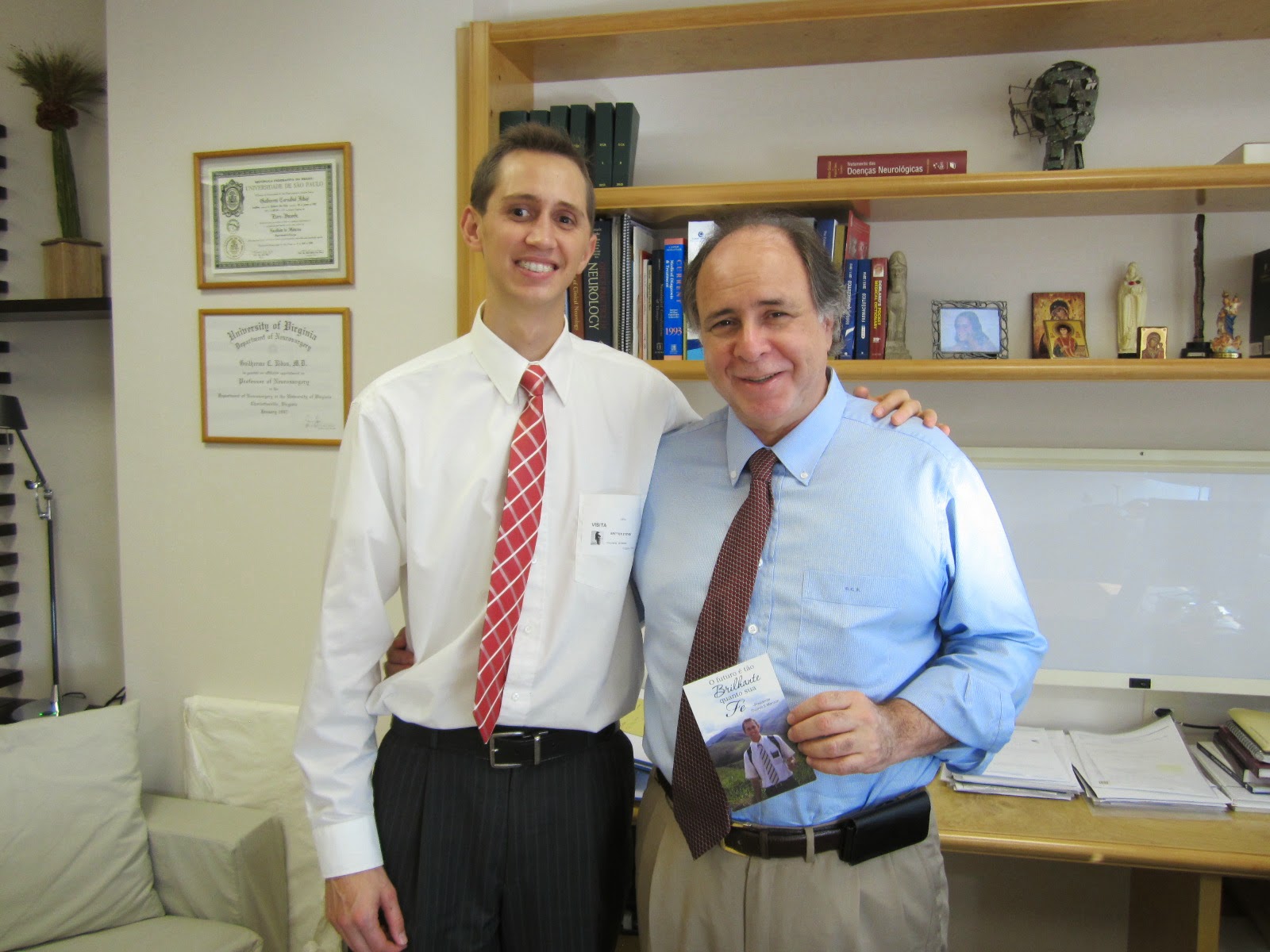 We told Dr. Ribus that we had a DVD we would like to have watched with him, but we knew his time was limited.  We gave it to him and hoped that Dr. Caponi could watch it as well. Dr. Caponi was Britten's internal doctor while he was battling phnemioa, diabetes inspididus and other conditions.  We saw him on a daily basis, and appreciated his compasion in treating Britt.  Dr. Ribus imformed us that he was out of town for a few months, but assured us he would get the video to Dr. Caponi as soon as he got back.  Dr. Ribus said, "He would have loved to see you."

Dr. Ribus was grateful for the DVD and said he was excited to watch it himself.  We also gave him a Card with Britten's picture on it.  Britten told him that on the back of the card was a email that he had sent home, just 4 months before his accident.  Dr. Ribus eyes went to the card and as we were talking and I could tell he was reading it.  It was great seeing his face as he read it, as he showed much expression.   It was so wonderful to have a great visit with a doctor that we have love and respect for.  He was thrilled that we would come back to see him.  He graciously took pictures with us and then gave us his number, if we ever needed to get ahold of him.
Thank you Dr. Ribus and staff for your kindness your compassion and competant care.  We love you! 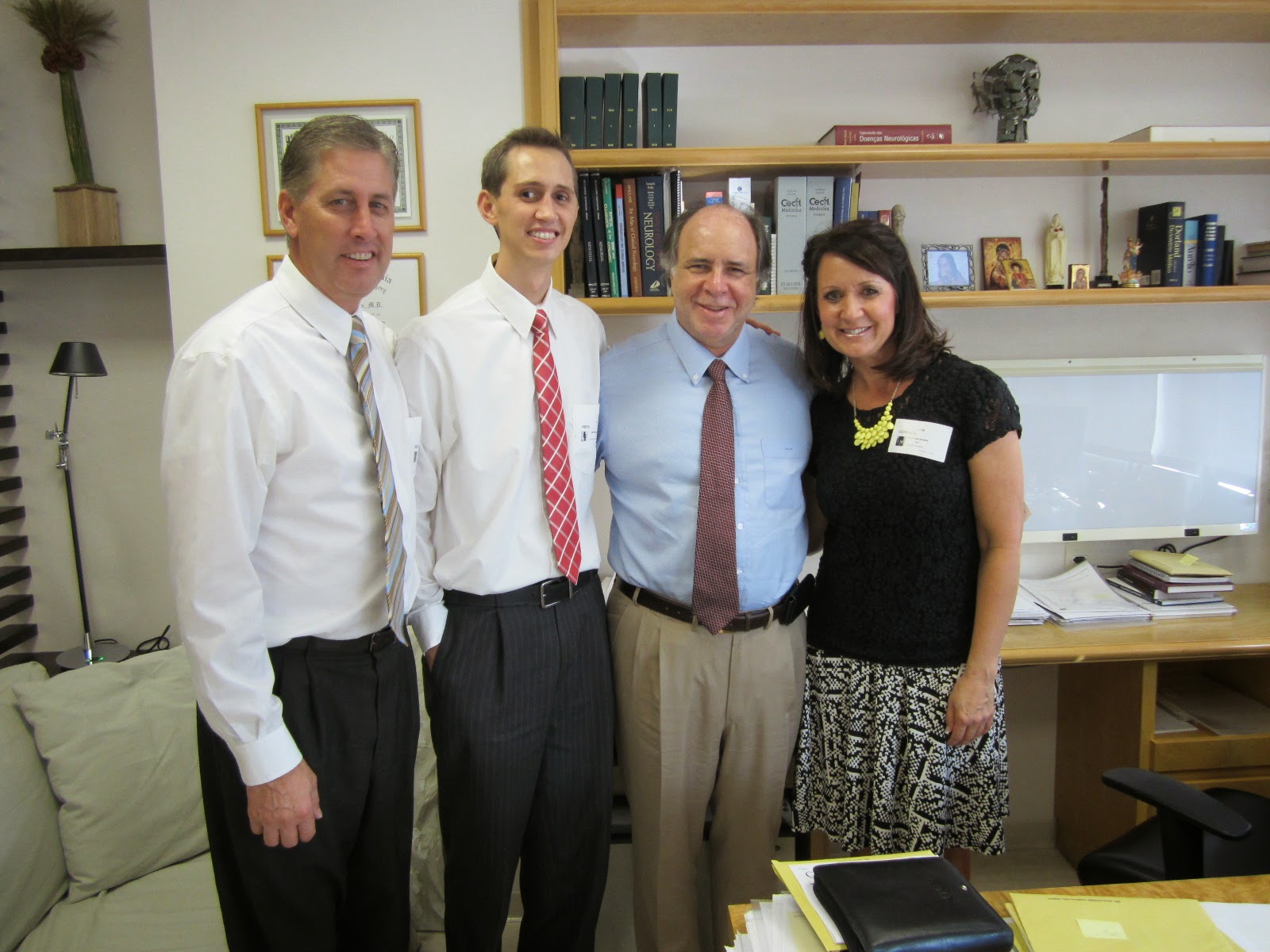 We left Dr. Ribus's office and went to a different wing of the hospital...the ICU.  I was so excited to see the nurses that we grew so close to during our 4 week stay.  They had become part of our family  as we watched them take care of Britten.  They treated Britt as if it was their own brother, as they were so kind and gentle with him.  The compassion they should us was heartwarming and I looked forward to seeing them each day.


The front desk paged Simone for us and we watched her come around the corner with a big smile!!! 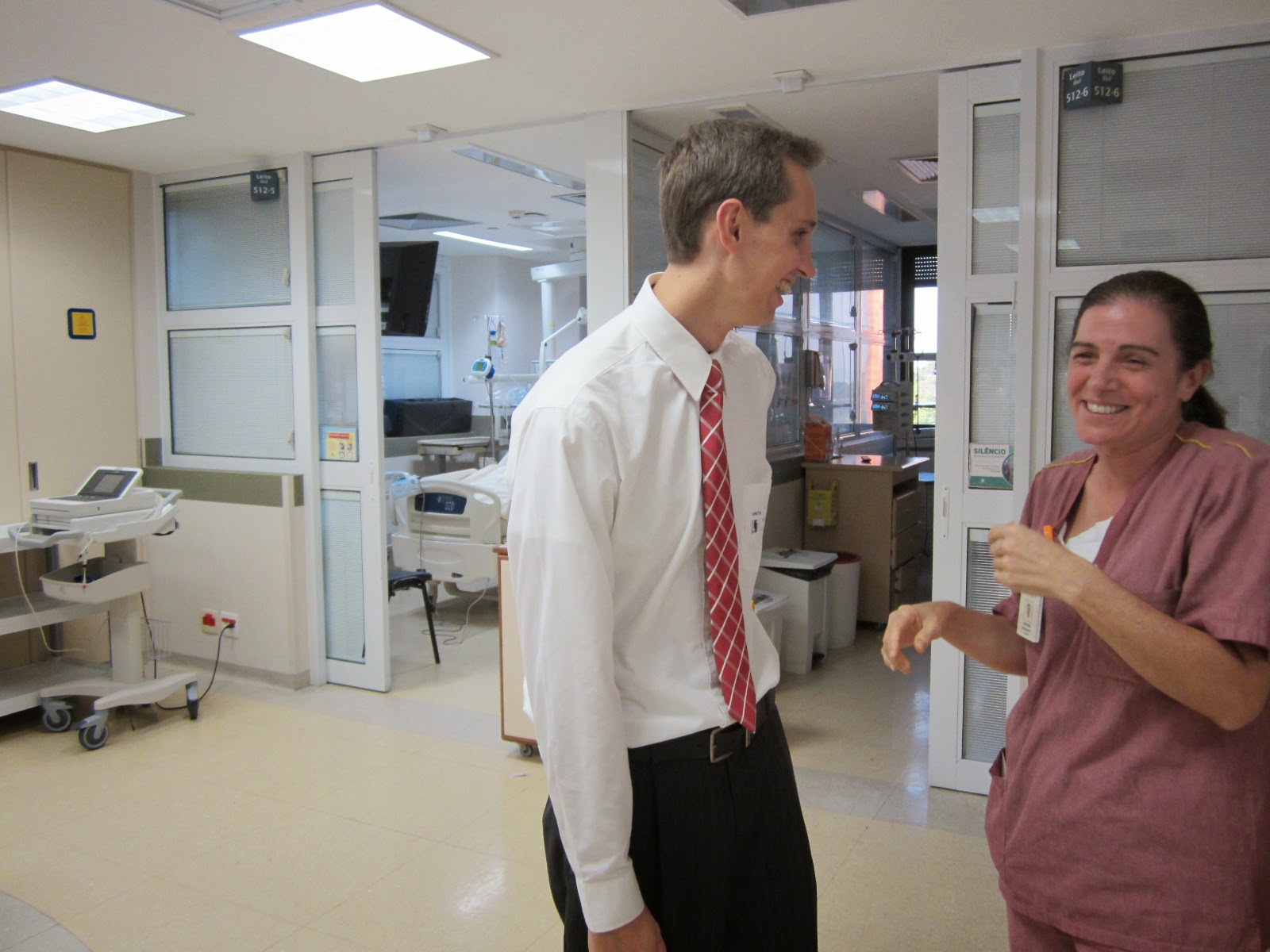 We were all smiling as well, as she came into the lobby.   Hugs were exchanged that were very meaningful, for she also had been a part in Britten's recovery.  After hugging Steven and I, we indroduced her to Britten.  Britten looked much different now, than in the hospital 2 3/4 years ago.  Beside's that, Britten needed to be introduced to them, because he didn't remember them. He was in a coma...sleeping!
Simone gave Britten a kiss on the cheek and big hug, while she patted his back and head. She stood back and just looked at him. She was so happy to see us, as we were her.  Britten said to her, "It's so good to meet you."  "I've been practicing my Portuguese so I could talk with you."   Simone asked him some more questions....... 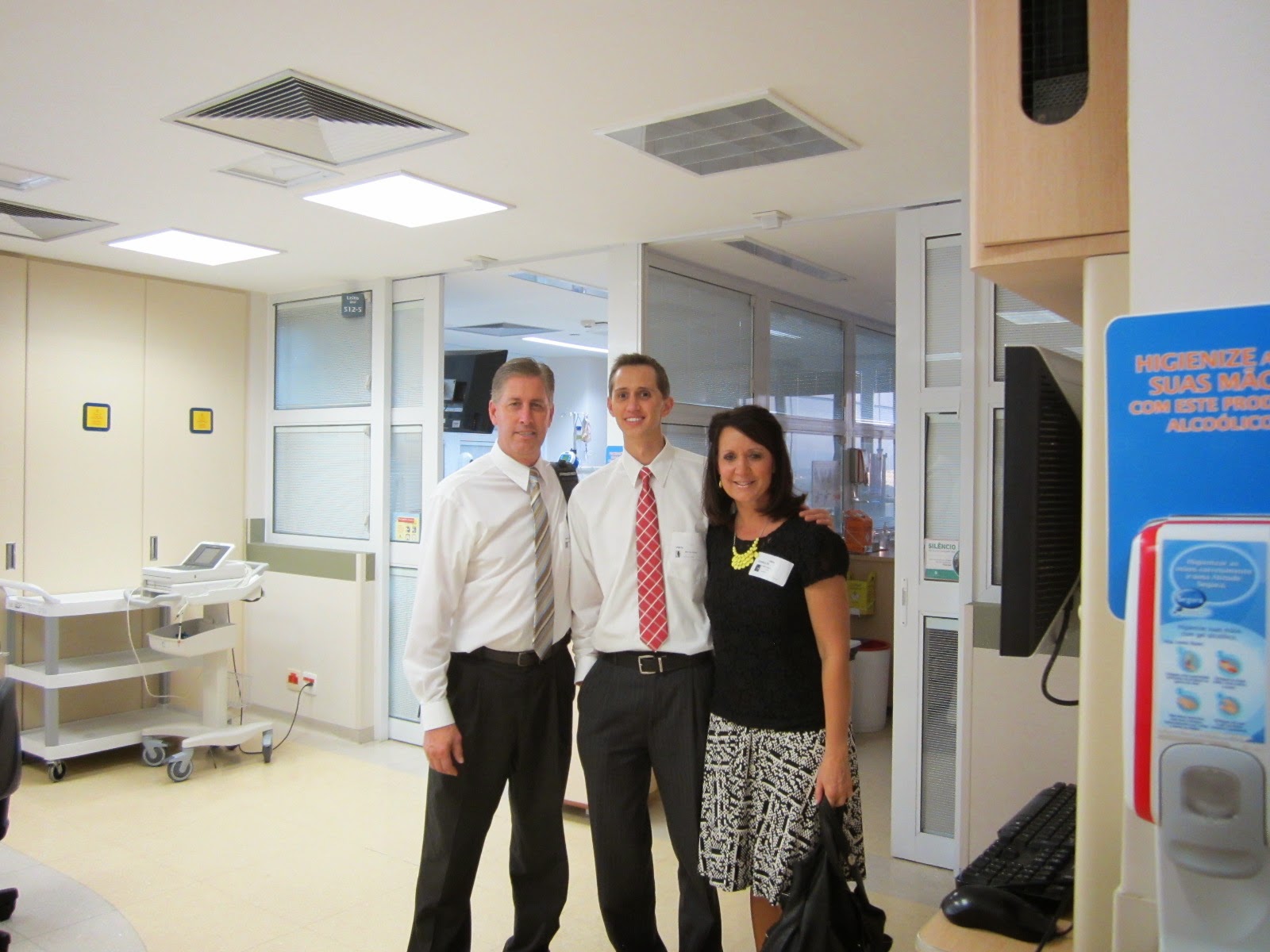 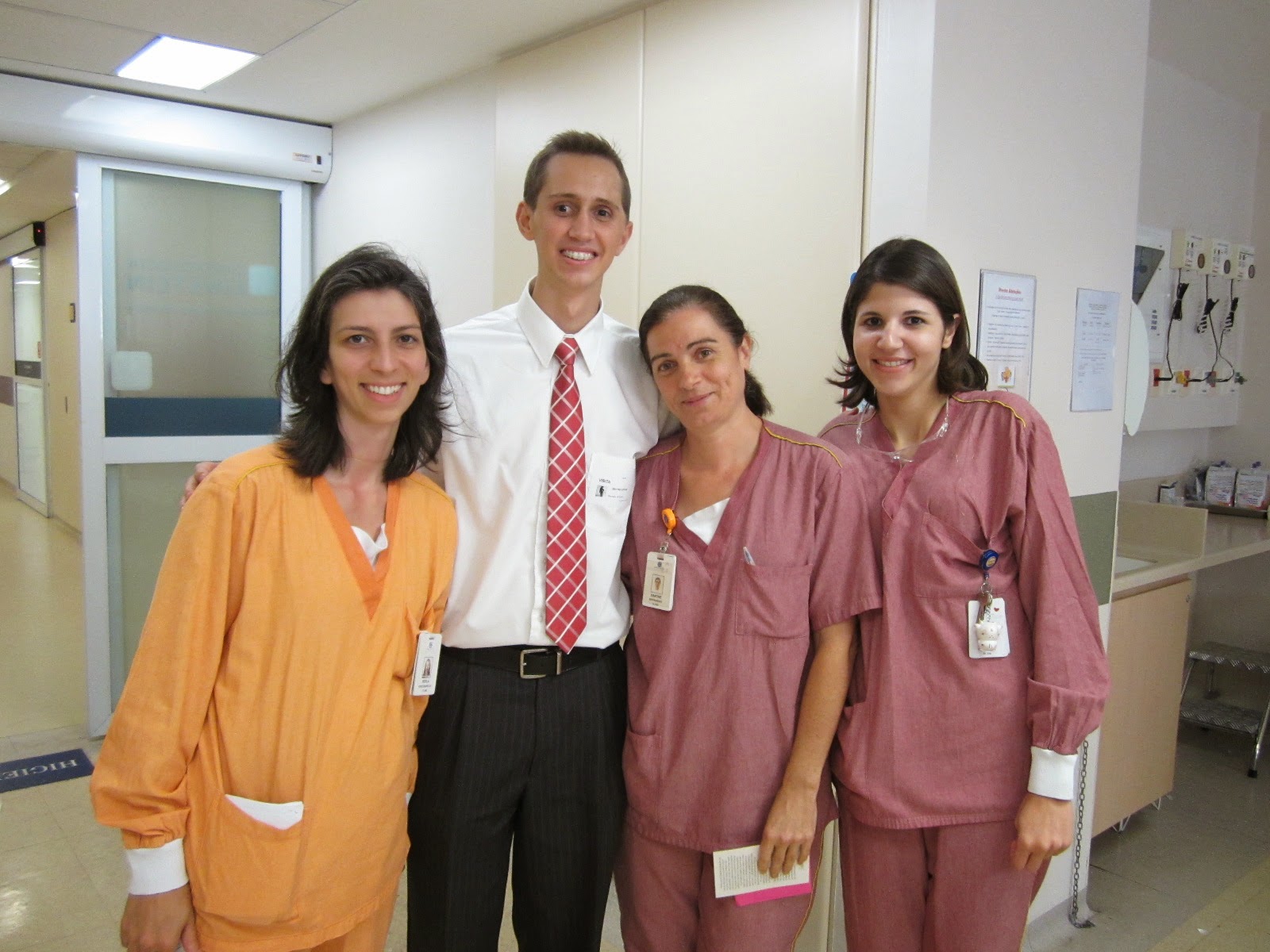 Simone took us back to the ICU so we could see others nurses that helped care for Britt.  Walking back to this area was all too familiar.  I could see into the room that Britten was confined in, as they were trying to keep him alive.   My heart sank to see another patient lay in the same room.   My thoughts went back to Britten.  Wow, what a long road it had been.  Being in the hospital seemed like yesterday, and yet the past 2 3/4 years has been a blur.
Simone brought a few of the nurses to meet us, and it didn't take them long to recognize us.

There were a few other nureses that weren't there and we were so disappointed to not see them.  We spent so much time with them as they cared for Britten. 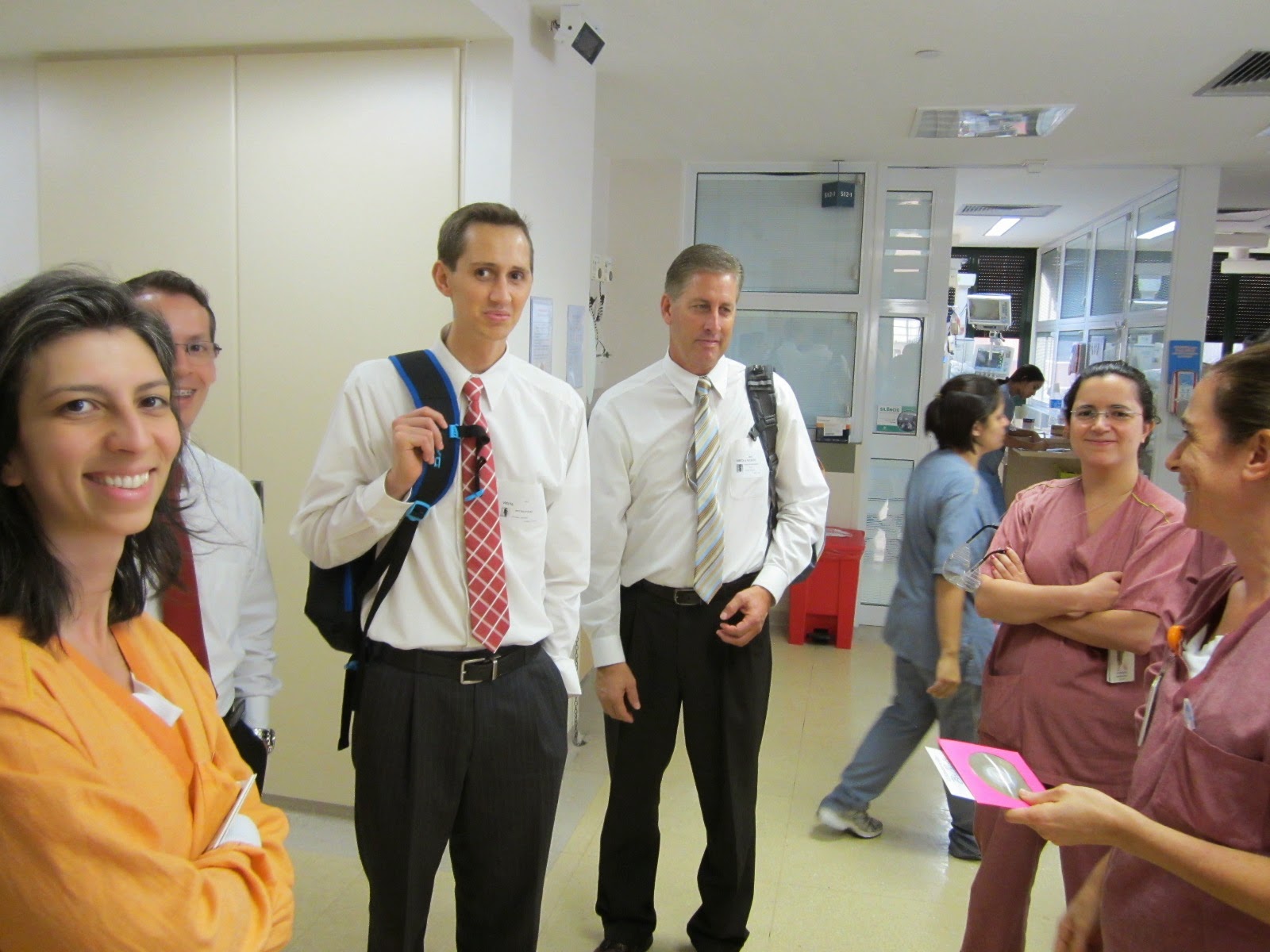 We gave Simone a DVD of our testimony and Britten's story.  She was so thrilled that we would think of her.  As we were visiting with Simone, some of the other nurses took the DVD from Simone's pocket and put it in the computer so they could watch it.  It was so wonderful to see the look in their eyes.  Some other nurses came around and marveled that we would come back to see Simone. 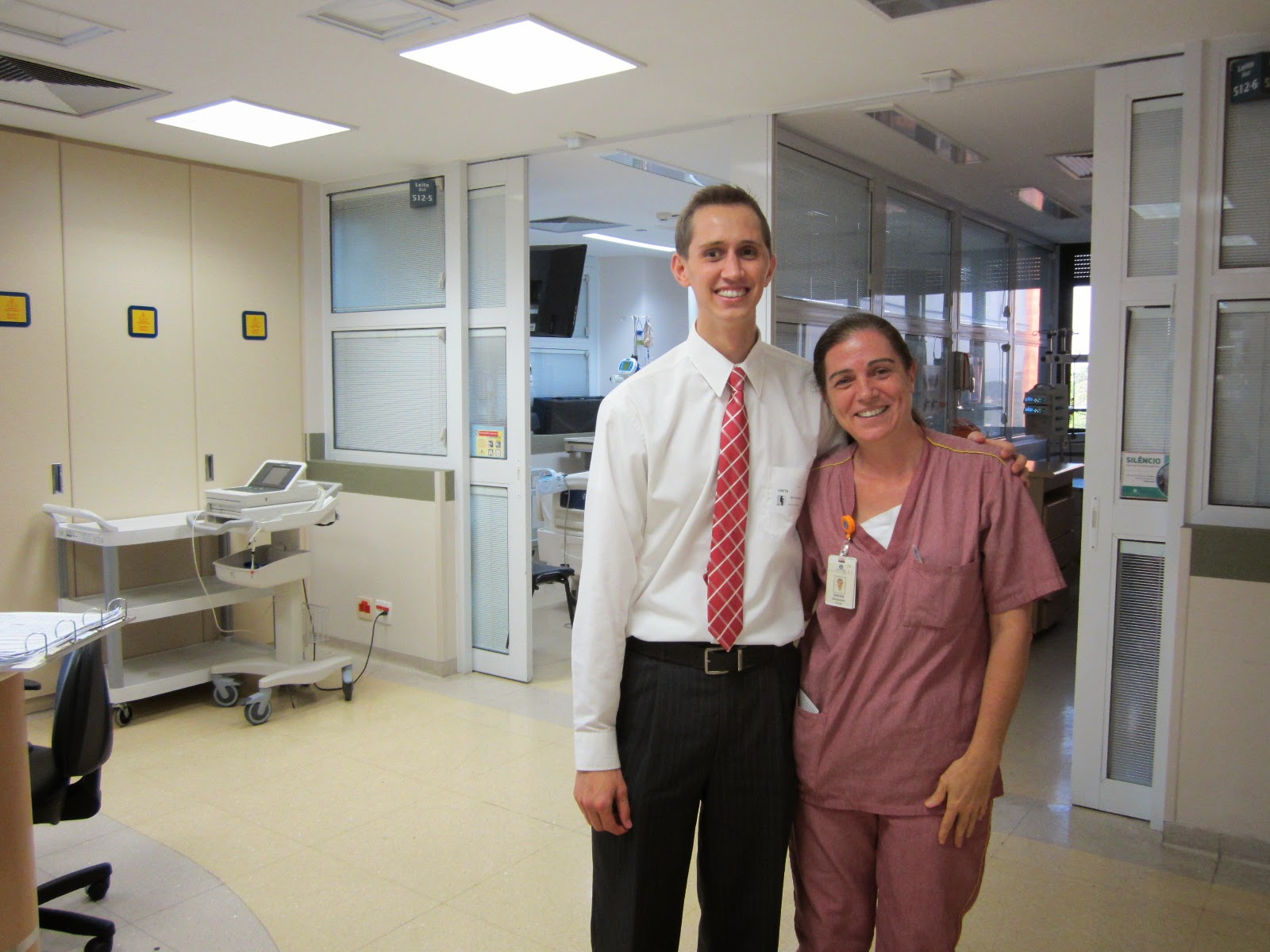 They started to get emotional as they said, "No one ever comes back after they leave the hospital.  We never get to see the outcome."  They were so happy and overcome with emotion at how well Britten was doing.
It came time for us to leave and it was more difficult than I had ever expected.  We may never see these wonderful nurses that we grew so close to in the hospital.  Our memories at the Albert Einstein Hospital and the staff that took care of us, will always hold a special place in our heart! 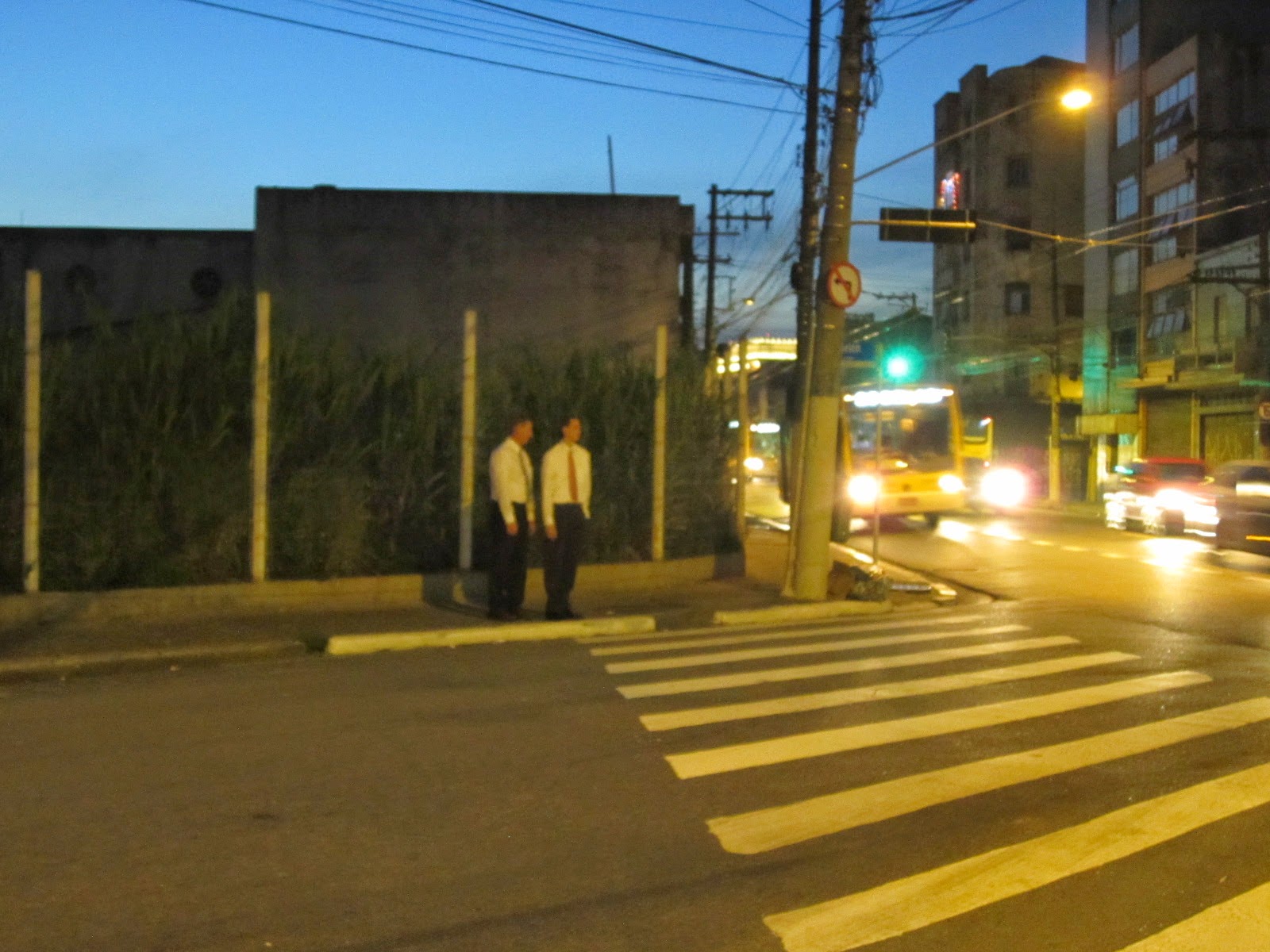 After we left the hospital, we decided to visit the place of the accident.  Britten had always been curious of where and how it could of happened.  We found the street were it was described to us, and got out of the car.  As we stood across the street from the accident site, we watched as buses and cars flew around the corner.  Sometimes it looked like the buses were on 2 wheels as the slipped  around the sidewalk.  It came into play of our minds, exactly how Britten's accident could have happened.  The buses sent chills throughout my body as they flew by us.  There was closure in our minds of how this could have happened, and it was okay to leave that memory behind us. 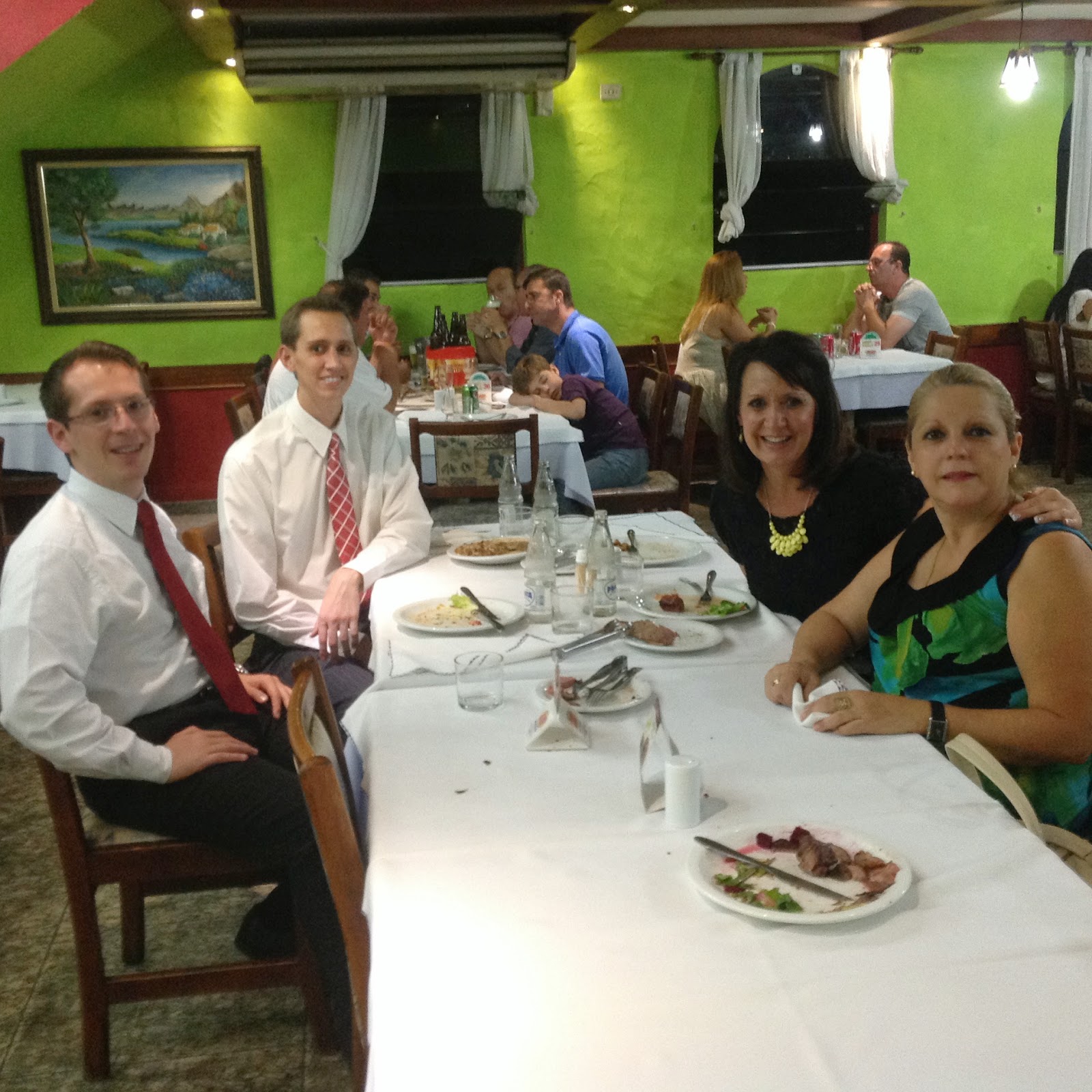 What a beautiful day it had been, meeting with Elder Costa and Staff, Dr. Ribus, Simone and other nurses.  Our hearts were full of love for these wonderful people that had become part of our lives, and part of Britten's story.  We closed the day with Felipe and Iza at a delicious Brazilian Barbque. And Yes....#rollmeoutthedoor!

Posted by The Schenk Family at 6:00 PM 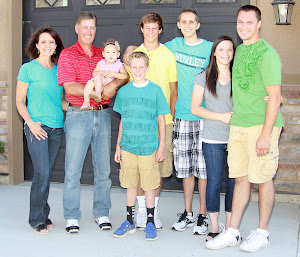 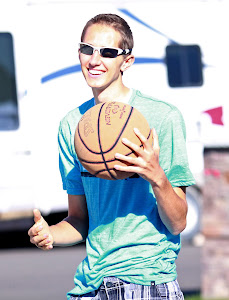